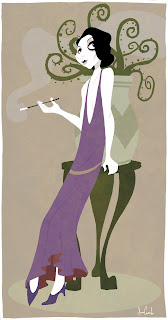 Posted by Sean Covernton at 1:28 AM No comments: 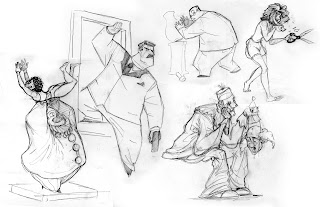 trying to work out more stuff. Simplified wrinkles, complicated wrinkles. And trying to figure out why the hell whenever I draw a girl the drawing ends up HORRIBLE.

Oh and as a side note the line in my head for the fat clown doodle was "Koko has had enough of this bullshit"
Posted by Sean Covernton at 12:13 AM 2 comments:

The rain has returned

And so we continue with our regularly scheduled macabre programming. 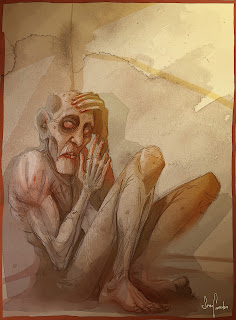 As a side note there was some process behind this which I'm going to rattle on about. It started entirely digitally, just screwing around, but it wasn't coming out.

I wanted to keep working on it though so I printed it out lightly and redrew it overtop and worked out the form. I don't know why I still find that WAY easier with a pencil than on my Cintiq.

Anyways then I went back in and was very strict about using the 3-tone shading system then I went in and did some refining work on the shading. Ultimately my goal was to remove the sketch entirely and work as though it's a painting like I've been trying to learn.

So I go on my merry way and eventually finish up, then decide it's better with a bit of the sketch in.

Just for fun I started applying bad photoshop filters to it when LO... one of them (Poster edges) looked kinda good. What I realize it did is reinforce the sketch underneath the painting and bring out some of the texture I'd lost in the process.

I do hate it when I rely on a blanket photoshop filter to fix things but I'll take it as a tool to throw into the toolbox.

I think the most frustrating thing though is that he looks so much less stiff and more realistic with the sketchlines in which was the opposite of what I was trying to accomplish.

Still I enjoy the finished result and happy to be enjoying playing again. 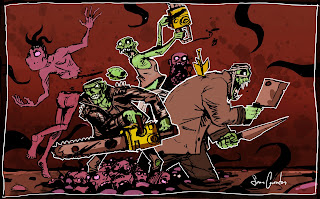 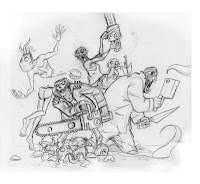 Never too long before it comes back to skeletons.  Always with the skeletons. 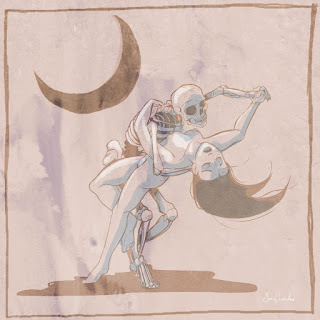 Posted by Sean Covernton at 4:53 PM No comments:

It was the poodle wot done it!