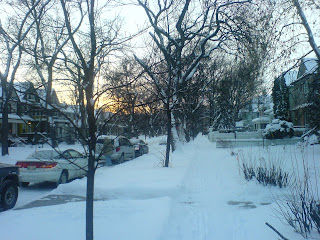 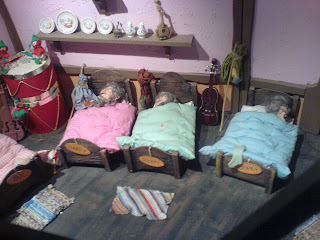 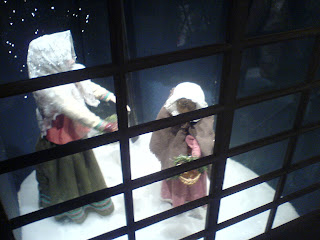 Well here I am blogging on Christmas Eve. First time I've been at a computer in some time and I'm having difficulty responding to and sending email so if you've mailed me in the last week it'll be a bit getting back =)

Anyways if I may be permitted a little nostalgic moment I'd like to share something with y'all that means a lot to me. Back when I was a kid Eaton's department stores in Winnipeg used to host a wonderful little Dickensian village set with with fairy tale displays in the windows. I haven't seen these things in years since Eaton's department stores were closed and in the later years the figures and sets had fallen into disrepair. But this year I learned that the Manitoba Children's Museum had erected the old set and it had been repaired. Looking into those old windows that used to be so much taller than I used to be was a real treat. All these figures and sets were hand made by people who apparently used to work for Eaton's. They're slightly crude, but look at them! All hand made little wonderful things! Here's a picture or two from Winnipeg and from the old village sets. Bring a tear to me old eye they do.

Everybody have a Merry Christmas, a wonderful holiday and a fabulous New Year! 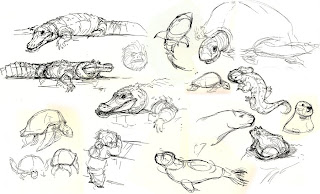 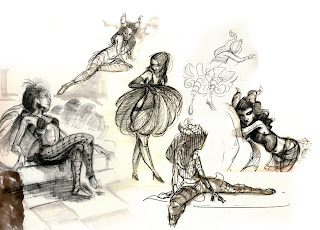 A couple friends of mine were in a burlesque performance and then I had another day of Burlesque Life Drawing which for the record is WAY more fun than regular life drawing although it's kinda dark in there so my hand shadow was over my sketchbook half the time. Still super fun. And Janis and Felicia and I went to the aquarium last Wednesday so I got to draw the turtle again and there were few enough people for me to have an actual sit down in front of the croc tank!

Oh yeah! There's a little short there as well... I almost forgot! Long story short that little guy in the scarf a couple posts down was a drawing that was done when i was really bored in the morning and then I started animating him a little. The whole thing is drawn entirely in flash and every frame is coloured by hand. Which for the record takes a long time. Hope y'all like it!
Posted by Sean Covernton at 10:23 PM 17 comments:

So... coalition government, eh? I can't decide if that's going to be stupider and less productive than a conservative minority. Probably. Making a deal with the Bloc never turns out well for anybody. The NDP on the other hand... Well it'll be an exciting new year in politics
Posted by Sean Covernton at 8:30 PM 7 comments: